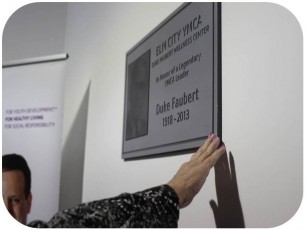 Emil “Duke” Faubert grew up during the depression as a Y kid in Pawtucket RI where he participated and organized many YMCA programs including Gray-Y for elementary-age children.

Following his graduation from Pawtucket H.S. in 1936, Duke worked in a manufacturing plant before attending the International YMCA Training School, Springfield College, where he earned his B.S. Degree in 1943.

Upon his graduation from Springfield College, Duke Faubert served in the U.S. Army Infantry, WWII European Theatre of Operation, where he earned a battlefield commission as a Second Lt. Following the war, Duke would serve in the reserves as a Captain until 1954.

Following his discharge from active duty in 1946, Duke began his service to the YMCA as the General Secretary at the Wallingford Y, establishing the first Y in that community. Under his leadership, the Y grew rapidly with many new programs and services.

In 1952, Duke continued his career as the General Secretary of the Norwalk Y bringing that Y to new heights and establishing a new branch in New Canaan, now one of the strongest Ys in the U.S.

From 1958 – 1973 Duke served as the CEO of the Metropolitan Springfield, MA Y where he spearheaded a capital campaign raising $4M for a new downtown facility.

And in 1973, Duke Faubert accepted his last post in the Y as the CEO of the Greater Providence, RI Y where he served for ten years organizing two new branches and raising millions for expansions and renovations at all eight branches. Following thirty-seven years of service to the Y and the community, Duke retired from full-time Y work but continued to serve as a volunteer mentor and consultant particularly in the area of endowment development.

In addition to his local Y work, Duke Faubert served the YMCA movement as a volunteer both nationally and internationally. In 1965, he was selected as one of three Y professionals to complete an extensive six-week study of group work in the Soviet Union. He served as the President of the Association of Professional YMCA Directors of the USA in the late 1970s and in 1980, he was the only American selected to serve as a leader for fifty young Asian Y professionals in Singapore. In the early 1980s, Duke Faubert ascended to the position of President of the World Association of YMCA Professional Directors.