The Woodruff YMCA is governed by our Board of Managers that consists of volunteers from throughout the community.

The Woodruff Family Y began as the Milford YMCA in 1952. It was located in the basement of Kay and Harold Reinhart’s home. Summer camp was a priority back then, as well as a YMCA Indian Guide program. The camp program was held on the Arnold College campus, which now houses condominiums. The camp was later held in Orange on Turner Lake. From there, in 1959, we moved “Camp Clark” to what is now Eisenhower Park. In 1969, Camp Seaside began and ran for 15 years. The name Camp Wepawaug was coined in 1970 and continues to run to the present day.

In 1958 our YMCA offices moved from the Reinhart’s basement to a location on River Street and shortly after to Broad Street in Milford. Two years later, we moved again, this time to High Street.

In 1968, Jeannete and Harold Woodruff donated the front fifteen acres on our existing Orange Avenue site. One year later we purchased the back ten acres from the Kivics and Hombergs.

In 1970, we broke ground and constructed the pool, lobby and shower house. This was the official beginning of the “Milford/Orange YMCA”.

In 1975 we sold the High Street location and winterized the Orange Avenue building. In the early 80’s we added an Activities Room, Fitness Center and Child Care room.

The original “Bubble” was purchased at this time to allow for year-round swimming. In the fall of 1993, we purchased our second “Bubble” to replace the loss of the first one suffered during “Storm Josh”.

The Greater New Haven YMCA and the Greater Bridgeport YMCA were merged in 1994 to form the Central Connecticut Coast YMCA. As part of this larger association, our facility members are now able to enjoy privileges at all CCCY full facility branches.

In 2001, the City of Milford signed a lease agreement with the YMCA for use of the property in front of our building. As a result of this contract, two soccer fields were constructed, our parking lot was expanded, lighting was improved, the playground was moved and we were connected to the city sewer system.

From 2003-2005, we underwent extensive renovations, keeping only the Activities Room, Fitness Center, Child Care Room, and the pool. We went from “Out of Bubble to under the Glass” with a reopening in May of 2005. We had a new lobby, locker rooms, family changing rooms and a pool with a splash pool completely under glass with a roof that opens. 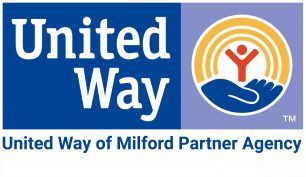 REGISTER FOR OUR PROGRAMS ONLINE